This week saw the latest technology on display at IP Expo Manchester. From AI and machine learning to cloud, security and WiFi, the conference was a great opportunity to learn and catch up with the cutting edge. Check out the top five things we learnt over the course of the two days below.

Ian Massingham always gives a great account of Amazon’s latest tech and he didn’t disappoint. His talk focussed on AI and machine learning with real-world examples of this awesome technology.

During a live demo of Amazon Rekognition the system successfully identified the entire front row’s gender, facial expression and whether they were wearing glasses! This was a great example of how developed machine learning has become, and the potential use-cases are really exciting. Minority Report eat your heart out!

In other developments, Amazon are trialing automated drone delivery in Cambridge, where we assume the lack of terrain brings a relatively simple environment to navigate! The first Amazon Go store has also opened to the public in Seattle. Think supermarket shopping with no checkout – just head in, grab what you want and then walk out.

#2 – Big improvements are coming to WiFi later this year

With a lot of attention on WPA3 and security developments, 802.11ax has flown largely under the radar. However, as Ashley Nurcombe of Aerohive discussed, the emerging standard promises to bring far better WiFi to crowded environments. The standard brings a higher throughput and some attempts to solve the half-duplex-nature of previous standards. Users too will benefit from increased battery life when on WiFi. So expect to binge away on the WiFi without worrying about running out of juice!

For a more technical look, check out Aerohive’s own reference poster here (PDF). On a personal note, we hope this technology is brought to IP Expo Manchester next year, as the WiFi was definitely patchy at times!

Okay, so they might not be powering the car to 1000 mph, but the three Raspberry Pi units are an important part of their data-gathering system. Built by Oracle, the system captures real-time data from 600 sensors around the car and makes it available via the cloud to schools, academics and the general public around the world.

Jason Rees and Lahini Sivaganeshan did a great job taking the audience through the building blocks of the system. This included real examples of how the system was used during the first high-speed trials in Newquay which you can check out at this link. 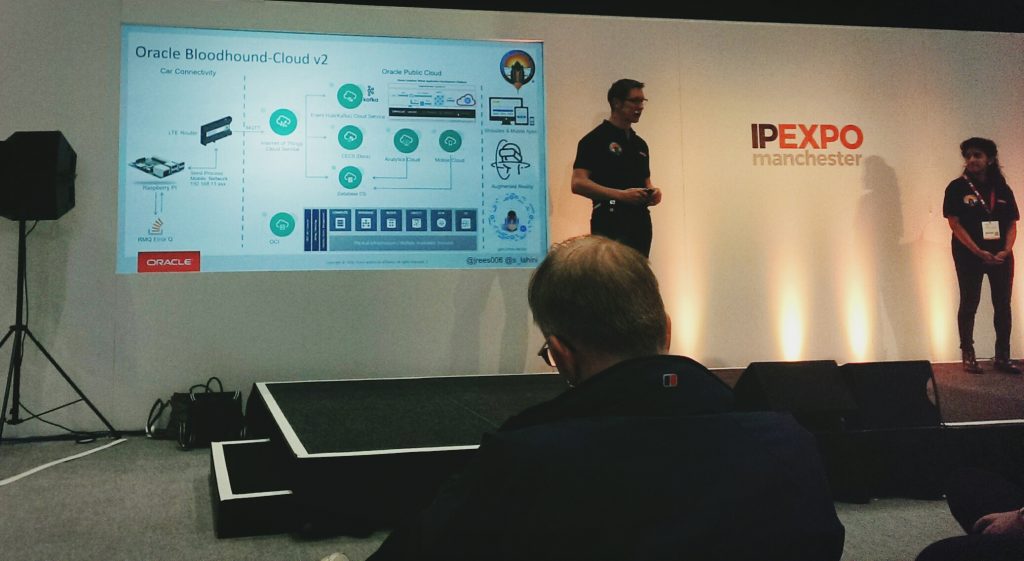 You can keep up with the Bloodhound SSC project here. The car has its next test run later this year in South Africa and will attempt 1000 mph in 2019.

It was hard to move without seeing GDPR in some way, shape or form. With presentations from legal services firms, technical solutions providers and even Microsoft, the looming deadline has focused everyone’s minds!

Microsoft are regulars at IP Expo Manchester and this year showcased their Compliance tools for Office 365. Alongside Teams and Flow, they have set out a comprehensive set of tools to ensure your business is compliant. In fact, both apps are built on top of Exchange and Sharepoint respectively, which allows companies to set their data policies in a standardised way across all systems.

Microsoft Flow was itself a revelation for us. Automating the more mundane and even tricky tasks, Flow looks to be a powerful tool for businesses to remove overhead and free staff to do more. We’ll be experimenting with it in the coming weeks.

With so many fantastic speakers and exhibitors, there was a great buzz around Manchester Central over the two days. As we are Paessler partners, we were happy to help out on the stand and we were impressed by the energy of all those who came to say hello. Needless to say, we’ll be back again next year!

Leave us a comment below to let us know what your big lessons were from the two days. And as always, get in touch if you want to talk to us about how we can help your business develop its infrastructure.